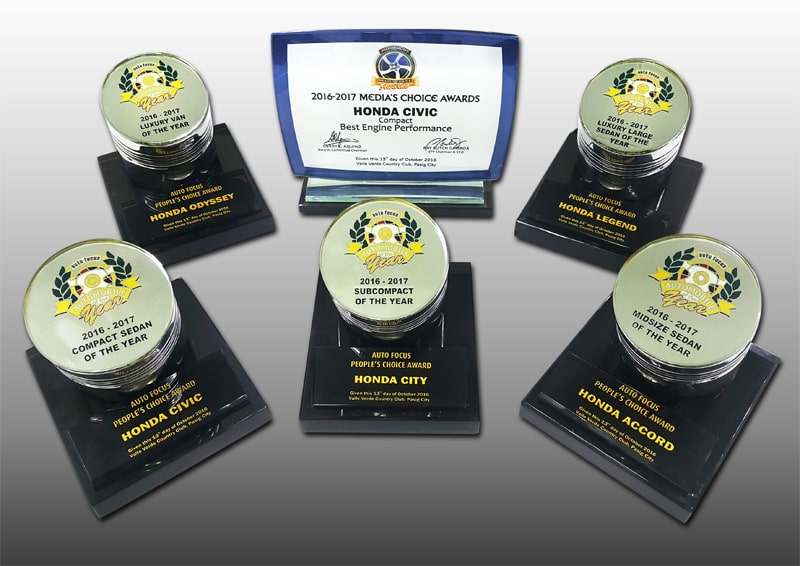 The All-New Civic, launched last April, took home both the People’s Choice Award for Compact Sedan of the Year and the Media’s Choice Award for Best Engine Performance in the Compact Sedan segment. The sporty compact sedan is also a significant contributor to HCPI’s sales, showing that its features continue to win over customers. In the month of September alone, a total of 602 units of the All-New Civic were sold. HCPI is committed to release more and has already delivered 1,443 units of the All-New Civic in Honda dealerships nationwide from June to September. The All-New Civic is now available for interested customers.

The New Accord bagged the People’s Choice Award for Midsize Sedan of the Year. Its refreshed version, released last May, now carries a more premium look with aerodynamic garnishes. It is also equipped with Cruise Control, Remote Engine Start Function, and Intelligent Dual-Zone Climate Control System for maximum convenience.

In the Luxury segment, the New Legend and the New Odyssey earned the People’s Choice Awards for Luxury Large Sedan of the Year and Luxury Van of the Year, respectively. Such recognition further cements HCPI’s presence in the luxury segment. As HCPI’s flagship model, the New Legend is Honda’s most powerful car to date thanks to its high-output and fuel-efficient hybrid system that combines one engine with three electric motors, resulting in maximum power and torque. Meanwhile, HCPI’s New Odyssey now has an EX Variant that offers a spacious 8-passenger seating capacity, new front and rear bumper designs, new prominent grille and 16-inch alloy wheels. Both the New Legend and the New Odyssey effectively combine luxury, state of the art technology, and versatility for customers to enjoy.

These awards prove the public’s continued appreciation for the Honda brand. They also reinforce Honda’s commitment to relentlessly deliver high-quality vehicles with top-notch features to satisfy the needs of the market.