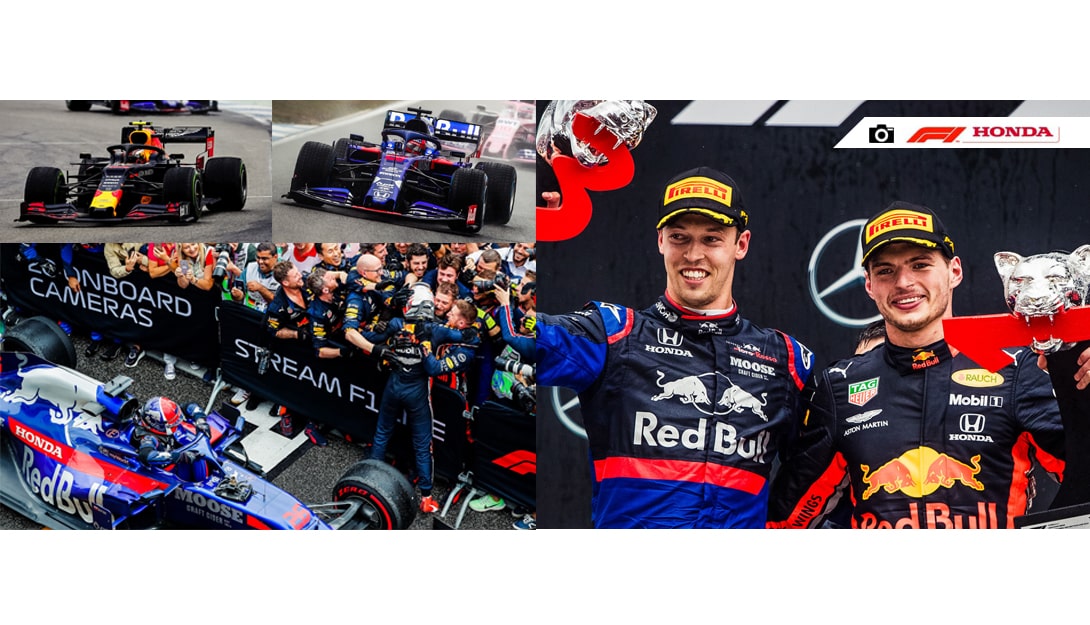 It was joy for both Aston Martin Red Bull Racing and Toro Rosso as Max won and Daniil made it two Honda-powered cars on the podium in a remarkable German Grand Prix.

Rain on Sunday meant the race started with four formation laps to test conditions before a slightly shortened race got underway with a standing start. Max and Pierre both struggled off the line and lost positions, but Max soon moved back up to third place while Pierre started to fight back after losing more ground during early pit stops. Alex was taking part in his first official wet F1 session and excelled in the early stages, rising to eighth place from 16th on the grid, while Daniil was running in 13th. Changing conditions meant a number of pit stops were required, and Max switched to medium tyres and recovered from a spin before going back to intermediates as Red Bull responded quickly. Having been attacking Valtteri Bottas, another excellent pit stop during a Safety Car period meant Max was in the lead. In total Max made five pit stops, and kept a cool head while many other drivers made mistakes, pulling away at the front to take a second victory in three races. A brave strategic call from Toro Rosso and Daniil saw him switch to slick tyres at the end of a third Safety Car period with 20 laps remaining, and as most other teams responded a bit later, Daniil rose to third place on the road before overtaking Lance Stroll for second. Good calls throughout the race from both teams meant we had all four cars running in the top seven in the closing stages, but after the final Safety Car restart with five laps remaining, Alex and Pierre unfortunately collided when fighting for sixth, resulting in Pierre’s retirement. The late restart also bunched up the field, allowing Sebastian Vettel the chance to pass Daniil for second, but the Russian held on to third place to give Toro Rosso their first podium since 2008, and register our first double podium since 1992.